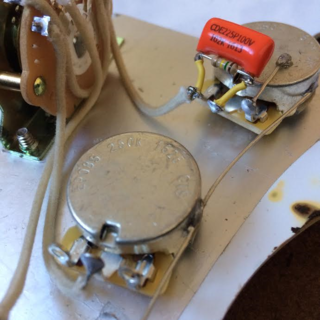 One of the major downsides of many modern guitar wiring setups is the frustration of losing the high end frequencies as the volume control is rolled down, resulting in a loss of brightness and a muddy, foggy tone. Thankfully, this is easily fixed by installing a treble bypass capacitor (known as the treble bleed mod) into the circuit. As the name suggests, a treble bypass allows the treble to bypass the load of the pot and sending it straight to the output. A treble bleed circuit uses a small value capacitor and resistor that connects across the volume input and output lugs. Once installed on a volume control, the high end frequencies bypass the resistance of the pot and go straight to the output. The treble bypass capacitor only passes the high end frequencies. It is the value of capacitor and resistor we choose, or indeed whether we wire it in series or in parallel that determines the treble cut off point.

This guide will show you what you need and how to install it.

Alternatively, you can purchase a pre-wired treble bleed kit.

Installation is simple. This mod is extremely effective yet costs next to nothing. 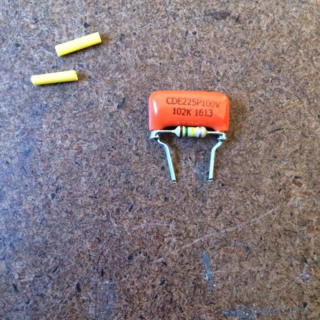 Quite simply, solder the treble bleed circuit to the input and output lugs of your volume control pot. Cut the capacitor leads to length, add the heat shrink tubing if you are using it (all this does is to protect the lead wires from coming into contact with the back of the pot, which acts as the ground) and solder into place as per the below wiring diagram. 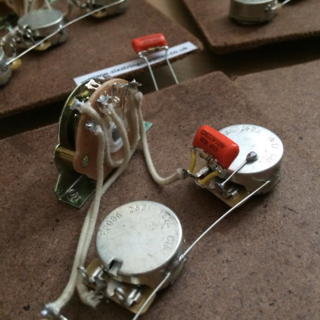 Our treble bleed kits consist of a 0.001uf orange drop capacitor and 150k resistor ready to install into your guitar.

Many players will play around with differing capacitor and resistor values.

It might take a bit of experimenting and playing around with different component values, but below are some typical and commonly used values.

Furthermore, treble bleed circuits can be wired in parallel or in series. Wired in parallel: most commonly used but can be a bit like Marmite. They are either loved, or hated. The reason being, if poorly matched components are used the resulting sound can be very tinny and the taper of the pot severely affected (it can actually get brighter at lower volumes). The volume roll off can be extremely slow in some cases.

Wired in series: eliminates the AWOL volume pot taper. It gives a less drastic change in volume pot taper but the tone of the guitar may change in a different way as the volume pot is turned down. This series combination passes a little more midrange than the equivalent parallel circuit.

Copper Shielding - How to Shield a Guitar

How to wire a Stratocaster

How to wire a Les Paul

How to wire a Telecaster

Added to your cart: